All objects in the collection are handmade and made of pure copper.
The copper is worked in Kathmandu, Nepal, by Shailendra Tamrakar, a traditional coppersmith. 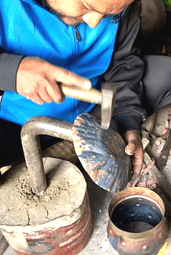 We herewith introduce you Tama-ko coppersmith Shailendra, he is 42 years old and was born in Patan.
At the age of 15, he started working in his family’s copper workshop and learned the craft. Through years of experience, he has specialized in restoring the copper parts of temples and is therefore much in demand.

these restaurations were not enough for him to make a living. Floor Joosten, the owner of Tama-ko (means Copper in Nepalese) designs met him in Nepal when she lived there and decided to develop a range of nice styles which will be interesting for the European market. And so, the co-operation did start in 2018. A win-win for everybody. Because having a real TAMA-KO design in your house will be timeless and a treat for the eyes.

NEPAL, a former Hindu kingdom in the Himalayas and a republic since 2008, has for years attracted travellers with its beautiful nature and ancient culture. The abundance of Hindu and Buddhist temples and monasteries and the small shrines that can be found everywhere along the road fascinates and quickly raises the question of the origin of this refined religious art.

the original inhabitants of the Kathmandu Valley, still form the largest ethnic group in the three big cities, Kathmandu (the capital), Bhaktapur and Patan (Lalitpur).
The artistically gifted and craftsmen Newari have always passed on their skills and talents with great pride from generation to generation.
In the valley, numerous examples of the distinctive Newari style can be found: the architecture of the richly decorated pagoda temples, the houses with their intricate carvings, the bronze and copper religious statues and the refined sculpture.
Around Patan’s Durbar Square, there are an infinite number of shops of the silversmith, goldsmith, woodcarver, sculptor and coppersmith. Some of these shops have existed for three generations.
Less visible are the workshops of these craftsmen, hidden behind low doorposts in the dark backstreets. The sound of knocking leads to the small courtyards where the coppersmiths are at work.

The Newari community has many different sub-castes, each with their own talented vocation; the Shakyas are silversmiths, the Shipakars woodcarvers and the Chirakars painters.
The Tamrakars are unsurpassed in working copper. The name Tamrakar is derived from the word ‘tama’ meaning copper and ‘aakar’ meaning to shape or give shape.
In the local language, the Tamrakars are known as ‘Tamo’ or ‘Tamot’.

TAMRAKARS have always played an important role in Nepalese culture.
Much of the decoration of the temples, like the intricate Torana’s above the temple doorways, is made of copper (later also of brass, probably because this alloy was cheaper).

Many traditional kitchen utensils in Nepal are made of copper (or bronze or brass). Copperware has traditionally been highly valued for its durability and because it is believed to provide valuable health benefits. Drinking water in a copper vessel contributes to good health. Traditional wedding gifts in Nepal are still household utensils made of copper, brass or bronze. A Newari always likes to display these gifts in his house.

The Newari coppersmiths are particularly skilled in ancient craft techniques such as bossing (embossing by drifting or hammering) and chiselling (artful work with a punch or chisel). 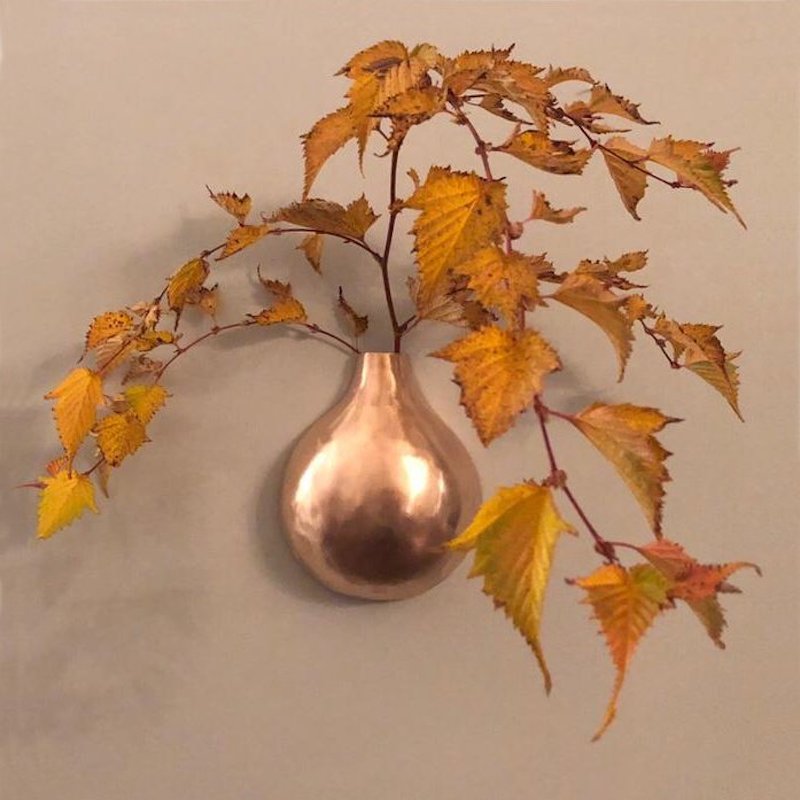 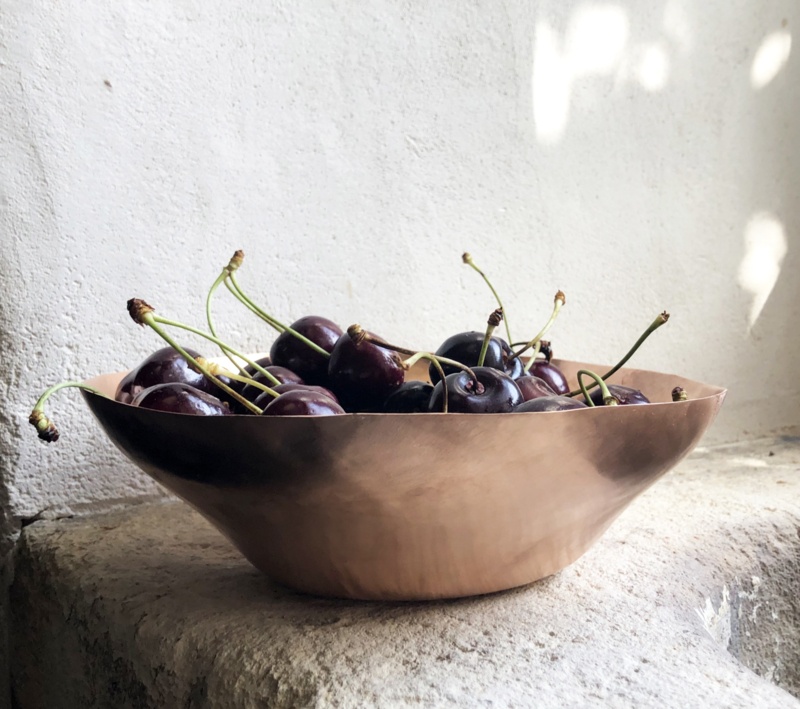 Copper, also known as red copper, is a metal that has had many applications for centuries, because it is malleable, durable and has a high conductivity of heat and electricity. Because of these special properties, it is widely used in industry. This also applies to copper alloys, particularly bronze (copper and tin) and brass (copper and zinc).

Moreover, copper has a beautiful sheen and warm colour. That is why it was used in the past for mirrors and throughout the centuries for art objects, jewellery and in interior design and architecture.

Other applications include coins, copper wire and musical instruments.

Copper also occurs naturally in the human body. It ensures a good resistance, because it is involved in various processes in the body. Among other things, it helps in the formation of connective and bone tissue and contributes to the absorption of iron by the body. An iron deficiency (anaemia) can therefore be the result of a copper deficiency. Copper can be supplemented by eating legumes, seeds, nuts, tempeh and chocolate, for example.

Because of its purifying effect, water pipes are made of copper and for thousands of years copper has been used as a medicine in the treatment of wounds and diseases.

Copper ore is mined in mines, either underground or above ground. Depending on the type of ore, it is processed into copper in different ways.

How best to maintain copper.

Our designs are made of pure copper and are unworked, so not lacquered, sealed or patinated.
This means that the copper will discolour over time, just like silver. How quickly depends on its use and what it comes into contact with.
The wall vase, for example, will not discolour quickly, but a dish that is used to serve food will.
That is why we give the following cleaning tips:
First try to polish the copper with steel wool 000 times, this is the easiest and fastest way.
Rub in Brasso Copper Polish and polish with a woollen cloth, then rinse with washing-up liquid and the soft side of a scouring pad or steel wool 000 and dry thoroughly.
Or rub in White Spirit or turpentine (do-it-yourself shop) and scrub out with a woollen cloth.
If necessary, rub in and scrub out beeswax afterwards; this keeps it clean longer.

In a solution of lemon juice (concentrated, in a bottle) and salt (1/2 tablespoon to a tablespoon of lemon juice). Or, for a small surface, use half a lemon with some salt to rub into the copper.
Then wash with detergent and the soft side of a scouring pad (or steel wool 000) and plenty of water; rinse well and dry.
ALWAYS USE SOFT MATERIALS FOR THIS, TO PREVENT SCRATCHES.
For this reason, also handle the copper with care, as it is a relatively soft metal and therefore scratches easily.
De waardering van www.ikigai-accessories.com bij Webwinkel Keurmerk Klantbeoordelingen is 9.8/10 gebaseerd op 41 reviews.