Surprising History of the Kimono

Kimono is the Japanese word for clothing. Nowadays, the word is mainly used to refer to specific Japanese traditional clothing. The kimono is traditional in Japan, but in the West, the kimono is nowadays a very trendy garment. It is originally made with straight lines, which makes the garment suitable for all shapes of people. So is our kimono, a ‘one-size-fits-all’ model that fits everyone.

Below, we take you through the history of the kimono. How did it originate, and what did it mean in Japan throughout the centuries?

Kimono from the Nara Period

Traditionally, and up to the Nara period (710-794), Japanese usually wore either ensembles consisting of separate upper and lower garments (trousers or skirt), or one-piece garments.

Typical clothes for the nobility in the Nara period 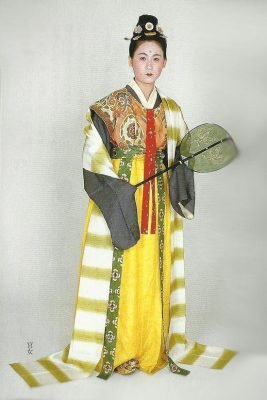 Typical kimono for the Nara period 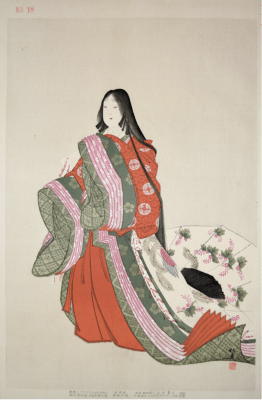 Typical clothes for the nobility in the Heian period

Kimono from the Heian period

In the Heian period (794-1185), a new technique was developed to make kimonos. In this technique, known as the ‘straight-line-cut’ method, pieces of fabric were cut in straight lines and sewn together. With this technique, kimono makers did not have to concern themselves with the shape of the wearer’s body.

Straight cut kimonos were suitable for all weather conditions: they could be worn in layers to provide warmth in winter, and kimonos made from breathable fabric such as linen were comfortable in summer. Thanks to these advantages, the kimono became part of the everyday life of the Japanese.

In time, when wearing kimonos in layers came into vogue, Japanese began to pay attention to how kimonos of different colours looked together and developed a heightened sensitivity to colour. The colour combinations represented seasonal colours or the political class to which one belonged. It was during this time that what we now regard as traditional Japanese colour combinations developed.

During this period, which spanned the Late Nara period (710-794) and the Heian period (794-1185), the clothes people wore began to differ according to their social status as either members of the nobility or commoners. The nobility began to wear clothes that covered their hands and feet and in which they found it difficult to move, while commoners wore clothes that were more like modern clothing, with straighter, less flowing sleeves and better mobility.

Kimono from the Kamakura period

During the Kamakura Period (1185-1333) and the Muromachi Period (1336-1573), both men and women wore a brightly coloured kimono. As the warrior class grew in strength, they went to the battlefield dressed in bright colours representing their leaders. 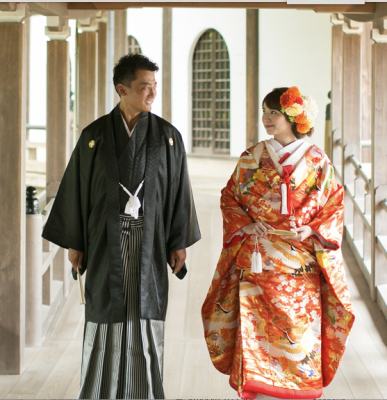 Edo, which was renamed Tokyo in 1868, now became the most important city in Japan. The resulting Edo period (also called the Tokugawa Era) lasted no less than 264 years. The years 1603 to 1868 are known as the last era of traditional Japan. During this period, Japanese culture developed almost without foreign influence. And the garment the kosode was one of the key elements of what it meant to be Japanese.

During the Edo period, the warrior clan Tokugawa ruled Japan. The country was divided into feudal domains ruled by lords. The samurai of each domain wore “samurai uniforms”, which consisted of a kimono and a kamishimo worn over the kimono, recognisable by the patterns on the kamishimo. A kamishimo is the combination of a sleeveless outer garment made of, for example, linen, starched to make the shoulders stand out, and a hakama, a kind of skirt-like trouser. This combination was called a kosode. As the techniques for making kimonos developed rapidly, the kimono became an art form. Kimono’s became more valuable and parents passed them on to their children as family heirlooms.

During the Edo era, the kosode was a visible unifying cultural mark. Every Japanese person wore it, regardless of age, gender or socio-economic position. On the rare occasions that a Japanese person came into contact with foreigners, a visible distinction was that foreigners did not wear a kosode.

As the poorer classes wore their clothes to rags, almost nothing of their kosode remained intact. But the higher socio-economic strata of society could keep their kosode and have new ones made. And like other art forms – including painting, poetry, ceramics and lacquerware – kosode adhered to aesthetic canons.

Perhaps the most important rule was the use of the explicit to denote the implicit. Thus it was that a cherry blossom was not just a pretty design; it symbolised mortal female beauty.  More than that, a refined woman would wear it in her spare time, not for work. This was true of most floral designs.

The quality of the fabric, the choice of pattern, yarn, dye, woodblock print and colour were essential criteria for the presentation of the rank, age, gender and sophistication of the person wrapped in it. And sophistication was of particular importance. The use of kanji (Chinese characters) and scenes from Chinese and Japanese classical literature demonstrated literary prowess. A wooden cartwheel, for instance, could refer to The Tale of Genji, or even to a scene in a Nō play (only selected aristocrats were invited to watch Nō plays).

The Edo kosode is thus a visible detail in a culture just before a fundamental change.

From the Meiji period to today

During the Meiji period (1868-1912), Japan was strongly influenced by foreign cultures. The government encouraged people to adopt western dress and customs. Government officials and military personnel were required by law to wear Western clothing for official functions. (Ordinary citizens, on the other hand, were required to wear a kimono with the family crest, called kamon, indicating their family background, on official occasions. This type of kimono is called mantsuki. Since then, mantsuki have become formal garments for Japanese people.

Nowadays, Japanese rarely wear kimonos in everyday life. They use them as haregi (formal dress) for occasions such as wedding ceremonies, funerals and graduation ceremonies. They are also worn at tea ceremonies and other special occasions, such as summer festivals and tanabata.